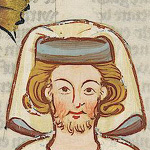 Hi, everyone!  I’m usually known on-line as Tann, short for Tannhäuser (pronounced "TAN-hoy-zer" or nearly enough) — which I think both more memorable and descriptive than either John or Charles, my birth-certificate names (though perhaps not much more than “Johannes Karlus,” the names given me at the font).

I grew up in the days when Hanna-Barbera and Filmation dominated the TV cartoon world, so I was never as horribly affronted by newer cartoons taking the place of the ones from the 'Nineties as some fans seem to be.  After all, I was used to my favorite cartoons being supplanted by newer ones.  Still, I do have to say that Disney has a special gift for cancelling great cartoons long before they have to and replacing them with lame ones. I'd give a million Fish Hooks, Two More Eggs, and Pickle and Peanuts (dare I add, Star vs. the Forces of Evil? I dare! I dare!) for one more season of Wander Over Yonder, Randy Cunningham, or Rapunzel's Tangled Adventure.

Retrieved from "https://tangled.fandom.com/wiki/User:Tannhaeuser?oldid=10221"
Community content is available under CC-BY-SA unless otherwise noted.