This is a list of the various outfits that Rapunzel has worn in some episodes.

This is the outfit Rapunzel wears for every episode of season one. She also has been seen to wear the same outfit in six episodes of season two which are Goodbye and Goodwill, Freebird, Vigor the Visionary, Curses!, Rapunzel: Day One and Lost and Found. She also wears this outfit at the end of the series finale episode Plus Est Est En Vous. 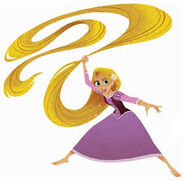 Rapunzel wears this outfit while helping Monty catch the gopher. It consisted of pumpkin-orange cloak with white cuffs and a white collar, a brunette wig and glasses.

Rapunzel uses this night gown as her pajamas. It is a light blue skirt with a blue ribbon. She wears this outfit in The Return of Strongbow, Pascal's Story and Pascal's Dragon.

Rapunzel wore this on her coronation in Tangled: Before Ever After.

This outfit first appears in the Season 2 pilot episode, Beyond the Corona Walls. This more outdoorsy outfit consists of a pink blouse with rolled up sleeves, a leather belt, and a shin-length, two-colored skirt. Aside from being different main colors than her regular outfit of Season 1, this new look is also accompanied by a slightly altered, but still new hairdo for Rapunzel. Her hair now has a little pink bird-shaped pin in it where there used to be a white and yellow flower. Her hair also has a braid and is tied up in magenta rather than red beads. Rapunzel, as usual, does not wear shoes with this outfit, but does have a beaded anklet on her right, matching in color to the beads tied with her hair. She wears this outfit in Rapunzel's Return until the end of the episode.

Rapunzel wears this outfit in King Pascal. It varies from her usual color theme of purple and pink, this time being a leafy green.

Rapunzel first wears this in Season one's special, Queen for a Day. It is a rogue coat with pink fur trims and a dark red Santa-sized belt. It also has rogue earmuffs and pink gloves.

Add a photo to this gallery
.

This outfit first appears in Season 3 first episode at the end of Rapunzel's Return until Plus Est En Vous. The main color is purple, fitting for the purpose since looks like it serves as a temporary queen outfit. 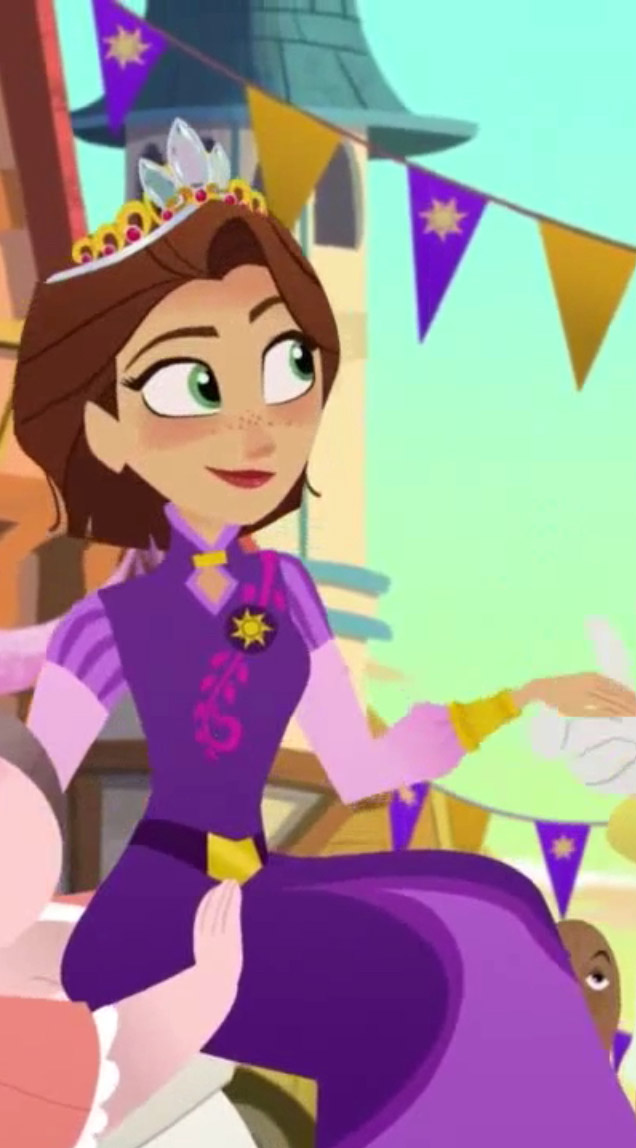 Retrieved from "https://tangled.fandom.com/wiki/Rapunzel%27s_Outfits?oldid=20206"
Community content is available under CC-BY-SA unless otherwise noted.